On February 15th the delegation of Europa Terra Nostra participated in the memorial march in Dresden, marking the 75th anniversary of the infamous Dresden bombing attacks in 1945. 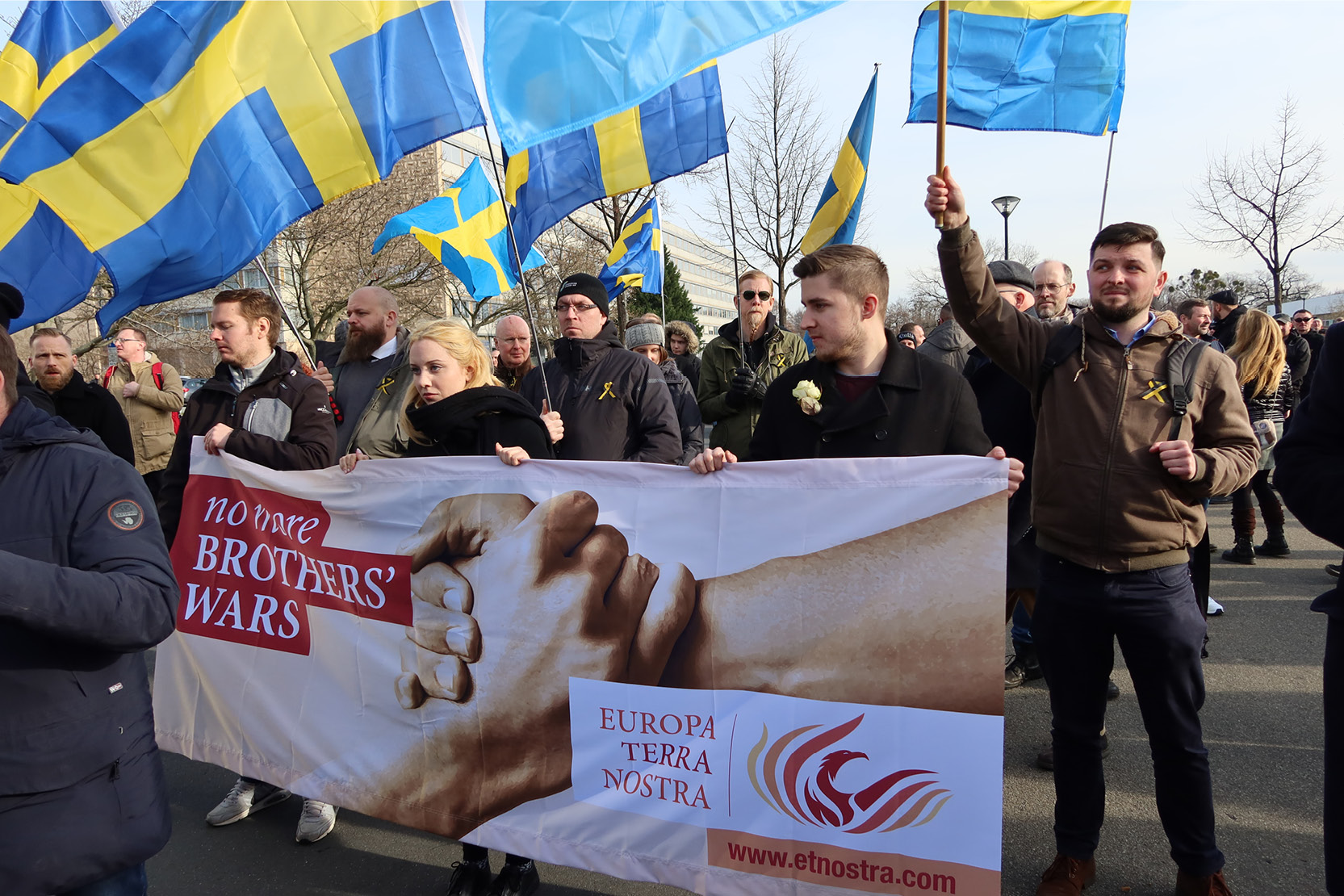 The Europa Terra Nostra delegation consisted of patriots and nationalists from Germany, Great Britain, Sweden, Croatia and the Netherlands. On the memorial march itself flags from all around Europe could be seen. France, Italy, Serbia, Netherlands, Sweden, Russia, Spain, Greece, Bulgaria, Croatia and Czech Republic were all represented and visible. This shows how Dresden has over the years became a symbol of unity and cooperation between nationalists.

Around 3,000 people marched peacefully and in respectful silence through Dresden, while police secured the march to prevent disruption by ANTIFA thugs. The police acted very professionally and no significant incidents were reported.

Powerful Speeches and Messages for a Brighter Future

As the people marching through Dresden arrived at the train station, the official commemoration began. Speakers from Bulgaria and Hungary took the stage first, but also speakers from the USA and Great Britain were present. Representing Europa Terra Nostra, Nick Griffin, former MP in the European Parliament and former chairman of the British National Party addressed the crowd, delivering the following speech:

Yes, I said 1947, because the murders and starvation of the partly implemented Morgenthau Plan for the post-war extermination of the German people did not truly end until several years after the guns fell silent.

There is always guilt in war. Always guilt, on all sides. The losers are burdened with more guilt than is just, while the victors escape the guilt they deserve. That is certainly true of both the World Wars.

But it is not possible to inherit guilt. Guilt, whether it is exaggerated by lies and propaganda, or minimised by ignorance and rose-tinted spectacles, dies with those who were involved. Which means that the greatest injustice of World War Two is that, even today – a full lifetime after all its crimes and tragedies – a crushing burden of guilt and reparations payments is thrust on yet another generation of Germans.

So I have this message for the young Germans of today: Raise your heads, because you have nothing to be guilty about from the past. The only guilt young Germans can incur is if they allow the stories about the past to break their spirit, so that they fail in their duty to love and protect their country, its freedom and its people in the future.

Likewise, it is not possible for me, my four children or my eight grandchildren to bear guilt for what the British and American terror-bombers did to Dresden 75 years ago. But it is possible, it is only human, to feel shame. And today, standing before the descendants of German survivors of that terrible time, I do feel shame, and burning sorrow,  for what my people did to yours in the deliberate obliteration of an undefended city packed with refugees. Genuine refugees.

But we cannot dwell on shame, we cannot always be looking over our shoulders at the ghosts of History, whether they be real, or imagined. We need to look ahead.

And, looking ahead, we see a perilous future. We see a revised version of the old Morgenthau Plan being directed not just against the losers of last century’s wars, but also against the supposed victors. The Great Replacement – the deliberate elite-sponsored ethnocide of Christian Europe – is an undeclared war of cultural and ethnic annihilation being waged not only on the Germans, but also on the English, the Swedes, the French, the Dutch and every other nation of the West – even the Americans.

And you only have to look at the refugee resettlement plans of the European Union, the United Nations and the Soros-backed NGOs to know that the Poles, the Hungarians, the Russians and all the other nations of the East, are being lined up for the same ‘special treatment’.

So, let us move on from shame and from the old history and tragedies that divided our forefathers. Because, divided, we stand no hope of resisting what is being done to our peoples. Our enemies work together on an international level to destroy us, and we too must work together to build the National Resistance and save the nations of Europe.

Conflict, war, is once again going to be forced on us by the Merkel-class and their puppet masters. It is already too late to avoid that. But let us resolve, here and now, in this ultimate symbol of the tragedy of war between kindred peoples, that we will never go down the road to Brothers War again. Next time we are forced to bear arms, let us fight not against each other, but shoulder-to-shoulder. Nie mehr Bruderkrieg! 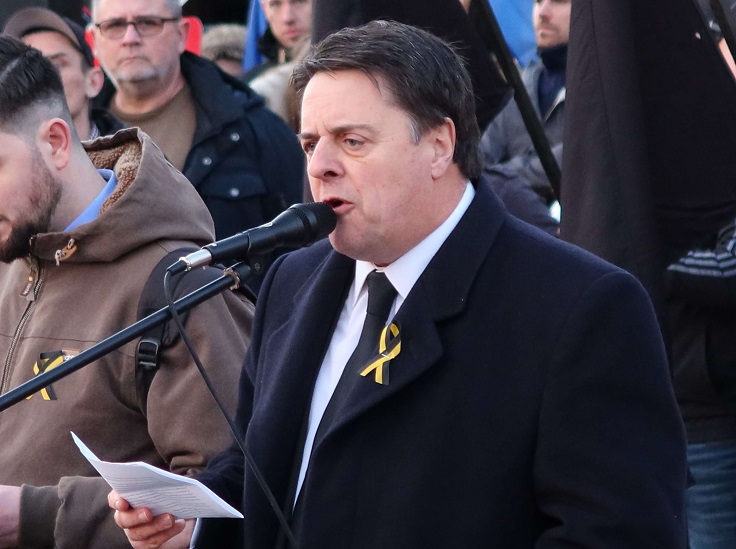 Mr Griffin’s speech was very well-received by the huge crowd, with frequent applause. His closing words in German particularly resonating with everyone. People gathered even closer as the national anthem of Germany was played and sung by the masses, totally drowning out the whistles and noise from the far-left, who had earlier disgraced themselves by refusing to abide by the minute’s silence for the dead. After singing the anthem, the commemoration was officially over. 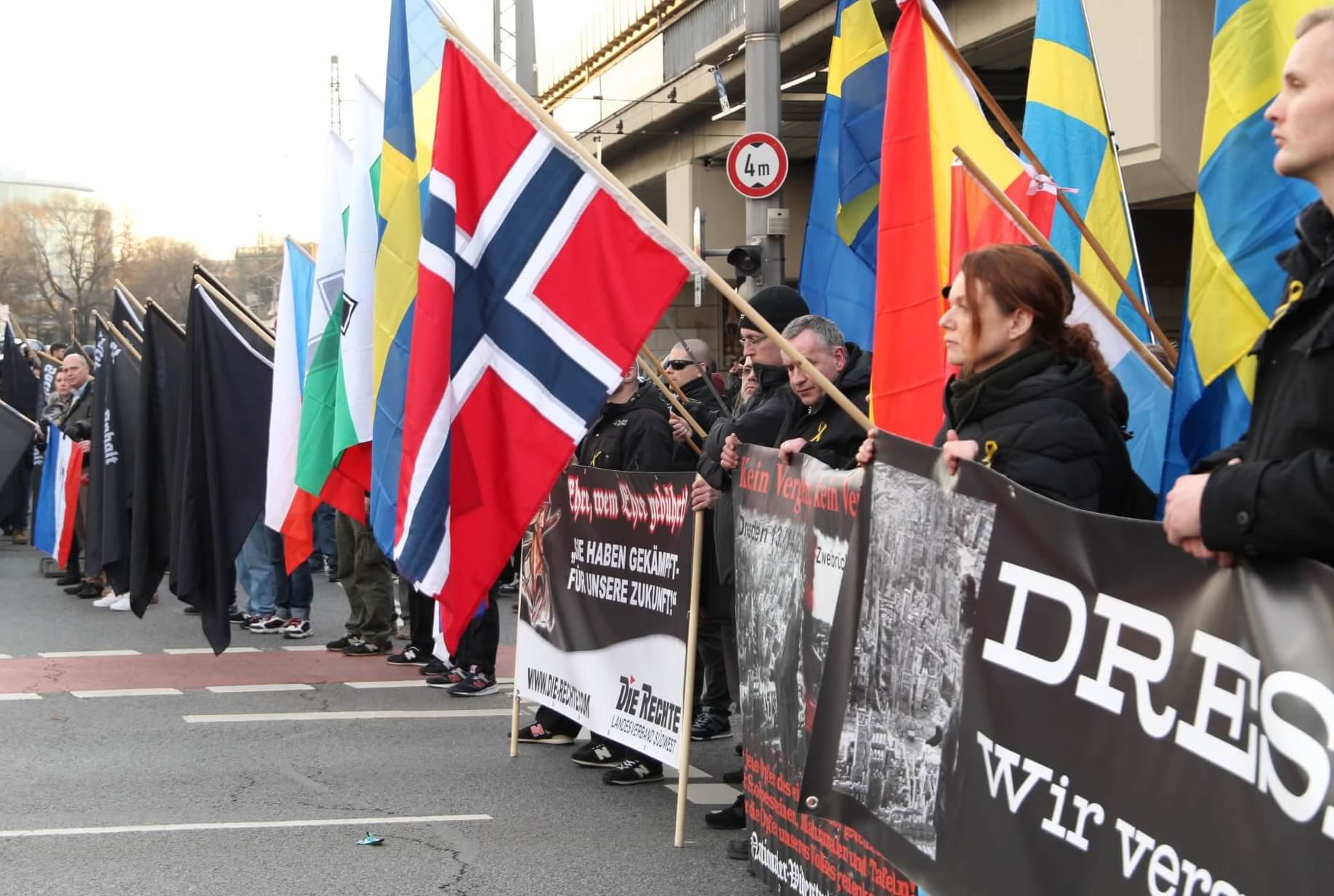 The contribution of the ETN delegation and Nick Griffin as speaker was perhaps just a small formal gesture in the eyes of the beholder, but a clear indicator of the way in which Europa Terra Nostra is moving, inviting all those carrying their national flags proudly to join our ranks and truly build a Europe of free nation states with no wars and hate toward each other.