European Ethnicities are in Danger - New Pact on Migration presented

The political guidance 2019 - 2024 of the current EU-Commission which describes the agenda of Commission`s president Ursula von der Leyen is trading under the nomenklatura “A Union that strives for more”. What “more” it strives for is among others to derive when it reads: “I support the establishment of humanitarian corridors […] as well as pathways for legal migration to help us bring in the people with the skills and talents we need. Europe will […] extend a helping hand to refugees fleeing persecution or conflict – it is our moral duty.”

On Wednesday, September 23rd the European Union unveiled its new migration pact that will require member states to take more migrants from frontline countries such as Italy and Greece instead of helping them to prevent the migration influx and consequently start deporting refugees back to their homelands. The degree of foreign infiltration in Europe requires a re-portation initiative, not a somehow management of temporarily fluctuating numbers of immigration. 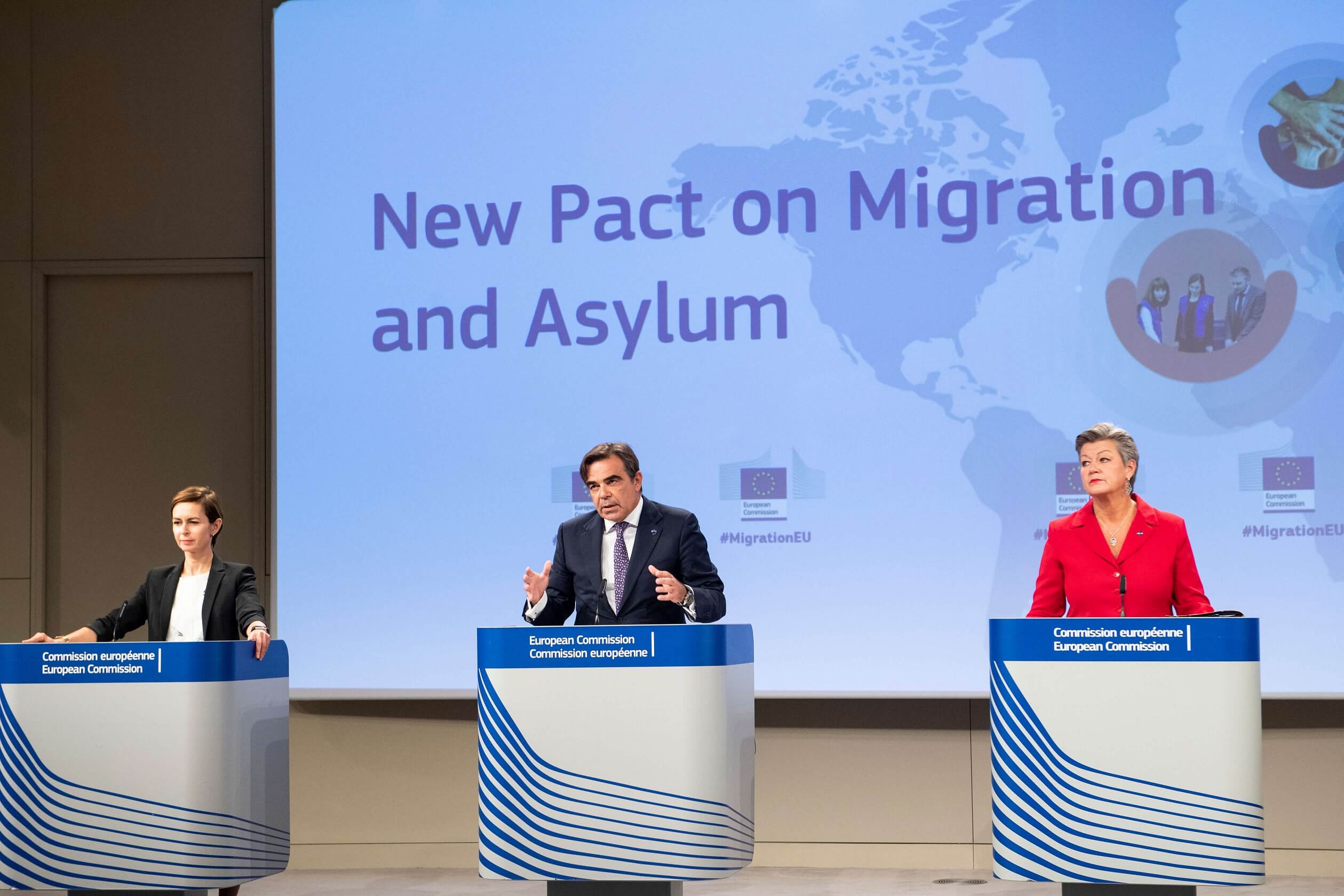 Margaritis Schinas, Vice-President of the European Commission in charge of promoting our European Way of Life, and Ylva Johansson, European Commissioner for Home Affairs, will give a press conference on a New Pact for Migration and Asylum. © European Union, 2020

While the European Commission`s president propagated the new pact would "rebuild trust between member states", EU Home Affairs Commissioner Ylva Johansson had to admit: “To be honest I don't think I'll have the chance to have too many 'hoorays' when I present my proposal […]”. Ursula von der Leyen further claims “to restore citizens' confidence" by the new pact striking “the right balance between solidarity and responsibility". However, it`s to ask, solidarity and responsibility towards whom?

The planned adoption of a new comprehensive Action Plan on Integration and Inclusion for 2021-2024 doesn`t seem to be indicative of indigenous Europeans being at the centre of Brussels consideration. Appeasements that recent arrivals are only a fraction of the peak (at the moment) fail as an argument given that this peak never was reduced, i.e. replacement-policy goes on and on resulting in an increasing share of non-Europeans of the continent´s population.

As far as the EU-Commission`s rhetoric of building confidence refers to more efficient and faster procedures, the question arises what for this efficiency aims – the return of asylum seekers or accelerating the immigration process? Moreover, it´s easy to say migrants not eligible to stay will have to return when permanently extending the rights of residence by recognizing more and more causes of flight to grant refugee status, for example, climate changes, homosexuality etc. For the sake of completeness, it should be mentioned that before the presentation of the EU Commissions`s new pact the UN Refugee Agency (UNHCR) and the International Organization for Migration (IOM) issued a statement calling for a "truly common and principled approach" to European migration and asylum policies.

In his speech introducing the New Pact on Migration EU-Commission`s vice president Margaritis Schinas not only spoke of “strong solidarity”, he rather declared that it was not a question whether providing solidarity but how to show solidarity. However, what´s more telling is Schinas` explanation that the Dublin-Regulations - which shall be substituted by the new pact - had not been meant for the nowadays challenges of public migration, they had been meant for very small migration. At latest, at this point the last one should recognize where this journey is heading.

Every European nationalist has to be braced for an imminent campaign of coordinated resistance against the regime in Brussels which according to its guidelines strives for “more”, namely more centralism, more heteronomy, more dept policy and more immigration. It´s to us European nationalist to stand up and fight to stop migration and start a re-migration system: it´s more than enough!