Why European Solidarity Does Not Need Compulsory Supranational Alliances

Historically, the end of March marked the beginning of two key events that have left a lasting mark on the Balkan region and the people living there to this day. These two events should also, and above all, be seen as precedents which, in direct comparison with each other, show in all clarity how, on the one hand, the solidarity of European brother nations with each other can bring a seemingly overpowering external enemy to its knees, but, on the other hand, also how forced alliances initiated by enemy powers can divide the peoples of Europe and play into the hands of foreign actors. 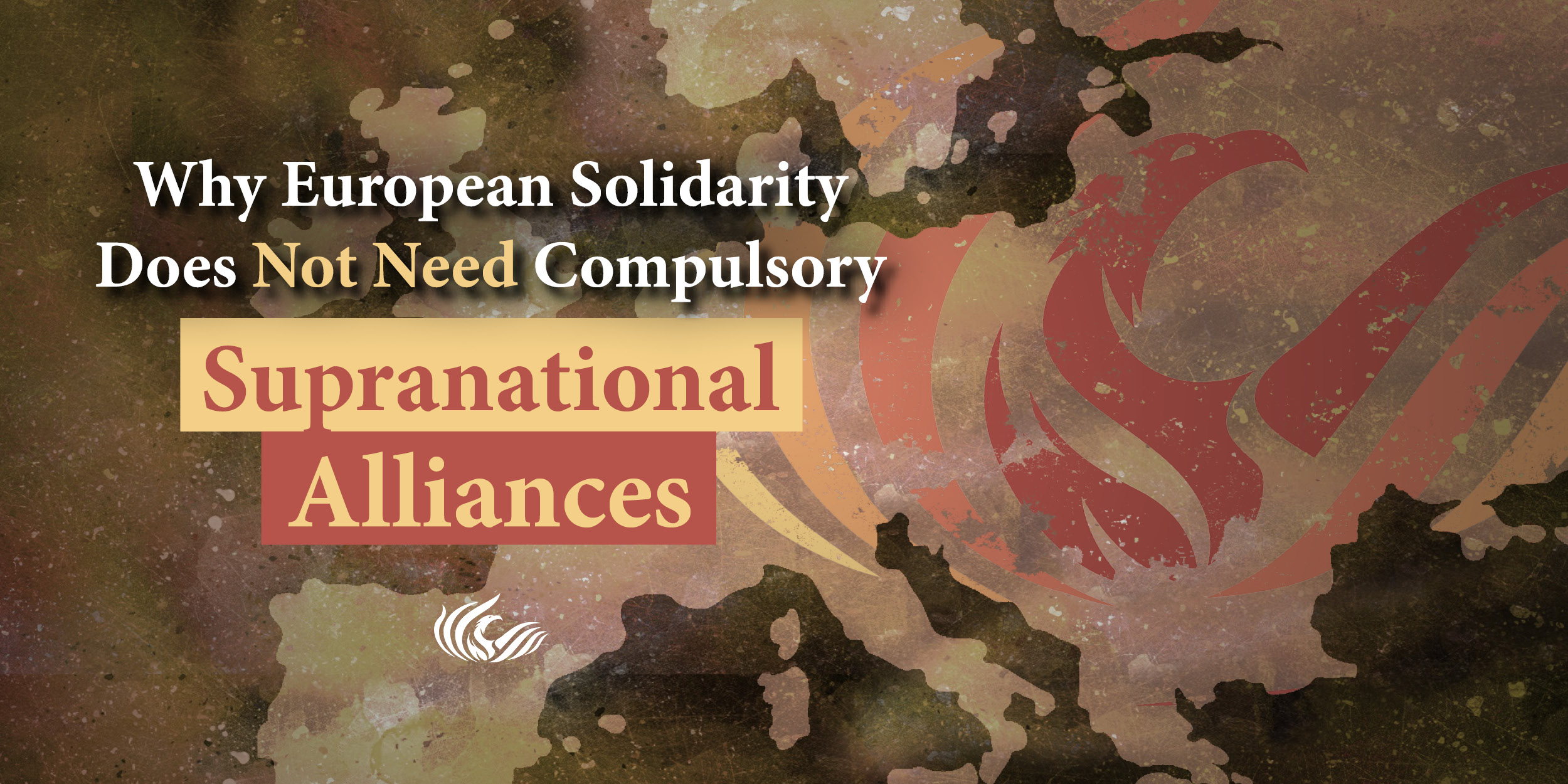 The Greek Struggle for Freedom Against the Ottoman Empire

On the 25th March 2021, Greeks celebrated the 200th anniversary of the beginning of the Greek War of Independence. This bank holiday (Evangelismoú) dates back to 1821, when the Hellenes first dared to revolt against their Turkish occupiers. Since the conquest of Constantinople (now called Istanbul) in 1453, Greece had been part of the Ottoman Empire. Under Turkish rule, the predominantly Christian Orthodox Greeks were severely disadvantaged. For example, the Ottoman tax system favoured Muslims exclusively. The first uprisings against the Ottomans in 1769 were bloodily put down. In the following years, the secret society of Greek patriots, Philiki Etaireia (Friendship League), was formed, which finally planned several uprisings in Constantinople, in the Principality of Moldavia and on the Peloponnese peninsula for the 25th March 1821. In the monastery of Agia Lavra, the insurgents swore to win back their independence, accepting only either freedom or death.

Initially, the revolution was a great success for the Greeks, but then the struggle faltered. After initial reluctance on the part of the Great Powers that were Russia, Great Britain and France – for whom the Turks were an important trading partner at the time – they finally sided with their Greek brothers and sisters, and the alliance defeated the Ottoman forces in the naval Battle of Navarino, off the southwest coast of the Peloponnese on the 20th October 1827. A large part of the Turkish fleet was destroyed. Russian troops subsequently invaded the Ottoman Empire (in the Russo-Turkish War of 1828-29) and forced the Turkish Sultan Mahmud II to surrender. This successfully ended the Greek liberation struggle.

The London Protocol of the 3rd February 1830 ended the military conflicts and declared Greek independence.

On the 24th March 1999, NATO began bombing the Federal Republic of Yugoslavia – founded on the 27th April 1992 from the constituent republics of Serbia and Montenegro – as part of NATO’s Operation Allied Force. The bombing, which lasted for 78 days, claimed the lives of between 1,200 and 2,500 people, including 79 children. This attack by the so-called "international community", carried out under the pretext of a "humanitarian intervention", took place without any mandate from the UN Security Council – i.e. in violation of international law – and ultimately caused the greatest humanitarian catastrophe in Europe of the late 20th century.

The attack was planned following the so-called Račak massacre in Kosovo, in which at least 40 civilians were allegedly murdered by Yugoslav forces in January 1999. However, the actual course of events on the ground has not yet been clarified beyond doubt. There are various detailed reports which contradict each other in many details, as well as in the essentials, and the documentary value of which has been assessed very differently over the course of time, even by officials. While the reports of the OSCE-KVM (Kosovo Verification Mission) and Human Rights Watch were used by the Trial Chamber of the Hague Tribunal as an important basis for documenting the events in connection with the incident in Račak, the International Court of Justice (ICJ) later denied the central reports their evidentiary value. Also questionable was the role of the then head of the OSCE-KVM, William Walker, who was blamed in the 1980s for covering up or condoning human rights violations in Central America, where he was involved in the illegal arming of the Contras as part of US policy-making towards the so-called "banana republics", covering up bloody state security measures during Ronald Reagan's administration as ambassador to El Salvador. He was also responsible for US co-operation with a repressive dictatorial regime in Guatemala. In fact, it was not only the Serbian side that suspected Walker's connection to the US intelligence service. Voices were also raised that the OSCE was working covertly for NATO. Walker's deputy, the Frenchman Gabriel Keller, confirmed in this context that many members of the KVM also had the impression that Walker's conduct during the mission reinforced precisely this suspicion.

In an interview with the Serbian journalist Mira Beham in November 2004, the former lieutenant of the German Bundeswehr, Franz-Josef Hutsch, who had worked as a war correspondent in Kosovo in 1998 and 1999, confirmed that the private US security and military company DynCorp also provided the US contingent of the OSCE KVM in autumn 1998, a few months prior to the NATO air strikes. Hutsch also stated that according to his research, 150 of 200 observers were employees of DynCorp. Most of the US and British observers had not worked as neutral verifiers, but had mainly conducted reconnaissance for US military target planning and had not been subject to any international control. The Western media also failed to investigate the role of privatised warfare. Most journalists were "compliant helpers of NATO in 1999". In this context, it was revealing that the OSCE verifiers who investigated Račak were almost all Americans and DynCorp employees. This is an absolutely unusual procedure, since observers who go on missions – whether they are mandated by the UN, the OSCE or the EU – are usually from at least two nations. In Račak, however, there were purely American patrols at the time, Hutsch has stated.

Today, numerous independent experts describe the issue of human rights violations as alleged pretextual legitimisation for NATO's undermining of the foundations of international law. They also question the reported extent or fundamental existence of a "humanitarian catastrophe” before the NATO air strikes began, which could have potentially justified military intervention. Instead, they describe the Račak massacre as an example of a "mythical massacre" within the framework of political instrumentalisation of a "rogue state" concept, and as an “emotional” motive of “moral propaganda” in order to legitimise military interventions, thereby serving as a pretext for the implementation of a neo-imperial US strategy in the Balkans. The latter seems all the more plausible in this context because the Račak massacre ultimately also served as an alibi for renouncing diplomatic solutions. These would have been the one and only way to push for an end to the conflict in the interest of all European peoples and nations.

What Lessons We Should Learn from These Two Events

The fact that supranational alliances such as NATO do not represent the interests of the European peoples should be obvious to everyone, especially since the illegal invasion of the former Federal Republic of Yugoslavia. The same goes for the fact that the so-called "alliance partnership" forces European states into conflicts that exclusively serve the geo-political goals of US strategists and their idea of a "world order". For example, since the invasion of Yugoslavia by NATO in June 1999, the United States military has maintained Camp Bondsteel, a military base near the town of Urosevac/Ferizaj (the Serb and Albanian names, respectively) in Southern Kosovo. Last, but not least, the sabre-rattling of some NATO member states, such as Turkey, against other member states, such as Greece, shows that the "alliance" does not pursue uniform, common interests, and is anything but homogeneous. The counter-concept to the supranational compulsory alliances is represented by independent, sovereign nation states, which – as in the case of Europe – should face any external threat in a united manner, based on the understanding of a mutual historical responsibility and an ethical, as well as ethnic, solidarity.

This approach is also reflected in the work and efforts of Europa Terra Nostra. Confessional and ideological divisions and separations – as well as the trenches and enemy images created by numerous unnecessary fratricidal wars – must be understood as outdated, and must be overcome in the course of a "future-oriented approach to history". The European Occident and its common heritage must be defended unitedly in the sense of a new "Holy League".

The European alliance in the Greek struggle for freedom against the Ottoman Empire can certainly be taken as a positive example in common European history. The invasion of Serbia & Montenegro by NATO troops, on the other hand, must be a warning to us Europeans that we must not be allowed to be forced once again into destructive brother wars, at the bloody end of which the enemies of a free and self-determined Europe of fatherlands always emerge victorious.