On Saturday, 20th of February, a demonstration took place in Paris in support of Generation Identitaire, a pro-native group created in 2012 that is known for agitprop events organized in Southern France that are mostly related to campaigning against illegal border crossings. The most recent demonstration gathered between 1,500 and 2,000 supporters, according to official figures, and was mostly peaceful, aside from a brief confrontation with a counter-demonstration group claiming to represent Antifa. French police forces acted primarily to keep both groups of demonstrators separated. 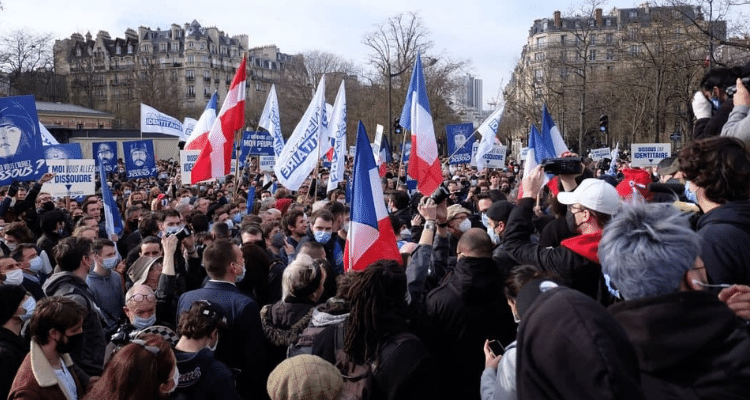 The protest came after Minister of the Interior Gerald Darmanin initiated a procedure of dissolution of Generation Identitaire following one of their actions at the French-Spanish border in January 2021. During a press conference, Mr. Darmanin claimed to be "scandalized by GI's undermining of the [French] Republic" (1). What he meant by such a statement was not elaborated upon – at least in the report by the respective journalist. Perhaps what GI did was so egregious that words couldn't do justice to the ignominy. So, what exactly happened? According to the mainstream media (2):

Three dozen of their members in cars – painted "Defend Europe" – settled at the Col du Portillon. Some went on a hike, using a drone to watch over the border, the gendarmerie said. Some activists were also made to vacate the hydroelectric dam of Melles.

Reactions to the demonstration from the media ranged from largely ignoring the event outright to only showing brief footage of the demonstration, with very little coverage. Even CNews – the second-largest news network in France – barely showed even a few seconds of the event. The radio and printed press featured mostly comments from left-wing parties and NGOs who have been attempting to get GI banned for several years. Coming from RTL – France's radio with the highest audience share – we get a fine piece of libel belied within the article itself (2). All this serves as just another set of reminders of professional journalists' common struggles with producing trustworthy material when it comes to certain topics.

As was reported, elected officials Carole Delga, Garonne Georges Méric (PS), Haute-Garonne MP Joël Aviragnet (PS) and Luchon Mazor Eric Azemar (independent) stated in a press release that, “This operation, conducted illegally, is only intended to create a 'buzz’…”, and concluded that they demanded the ban of “this violent and dangerous far-right groupuscule". Firstly, there is nothing illegal about using whatever optical means there is to check who is crossing a national border. The most damning act that the demonstrators carried out was to trespass into the dam area, which is closed to the public. More importantly, the Region Prefect stated that nothing that the demonstrators did disturbed public peace.

Other articles weighed in on the legal aspects of the procedure launched by the Ministry of the Interior, and the general takeaway is that it is far from a done deal, since there are well-defined criteria to be met for it to not to be nixed by the State Council, which partly acts as the Supreme Court for administrative justice. They include forming an armed militia or planning to overthrow the government. Political scientist Jean-Yves Camus (3) says that the Ministry of the Interior may try to build a case around "incitation to discrimination", but adds that "there too, the argument is tenuous, since they target all migration rather than specific groups". Let us forget the fact that they are not French citizens, so it is hard seeing how this angle could hold any water in court.

The investigation is still ongoing and no date has been given as to the decision. Meanwhile, the whole of French society waits with baited breath the conclusion of the leg work from the Gendarmes of the Central Office against Crimes Against Humanity, Genocide & War Crimes (OCLCH in French) regarding the aforementioned incidents (4).