On Friday 16th October, members of Generation Identity Denmark held what can only be described as a symbolic “funeral” or vigil for three young Europeans who were killed in brutal attacks at the hands of criminals belonging to the various immigrant communities in Denmark. Donning funeral attire and carrying a white coffin, the group drove to the front of the Ministry of Immigration & Integration Affairs building, laid down the white coffin, placed flowers on top of it and lit several small candles, before holding a short vigil. Photos displaying the faces of the three murdered young Europeans, and signs bearing the words “Multiculturalism Kills” in Danish (Multikultur Dræber), were held up as well.

Alongside this act of protest, Generation Identity Denmark have also publicly criticised the Danish government’s unsuccessful policies of integration for immigrants, and have openly called for the immediate repatriation of all illegal migrants currently living in Denmark. 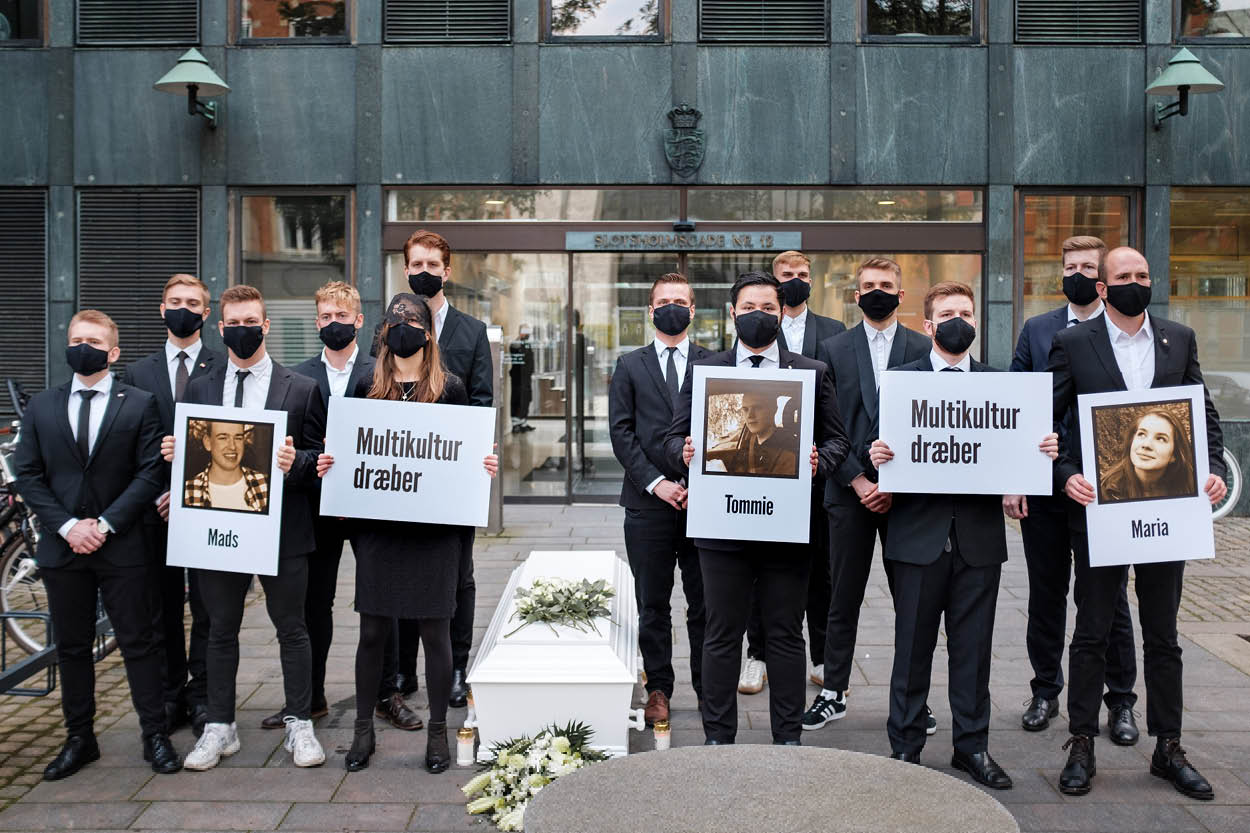 Here, it is only appropriate to bring to the reader’s attention the three young Europeans who lost their lives to immigrant criminals, which pro-immigrant and pro-migrant governments have willingly allowed into Europe of their own accord, without regard for the consequences, both short-term and long-term:

19-year-old Maria Ladenburger was raped and murdered by Iranian migrant Hussein Khavari in Freiburg, Germany in October 2016. Arriving to Germany in 2015, Khavari arrived using the false information that he was born in 1999 and was from Afghanistan. It had also been discovered that Khavari had previously been convicted of other crimes, including the rape of a 12-year-old girl in Iran (Khavari was only 14 at the time) and the robbing and assault of a 20-year-old woman in Greece. For the latter crime, he was sentenced to 10 years in prison, but was ultimately released early. Following the rape and murder of Maria Ladenburger, Khavari was sentenced to life imprisonment in 2018.

In May of this year, 19-year-old Tommie Lindh was hosting an after-party with several friends in Härnösand, Sweden. One of the guests at the party was Sudanese 23-year-old Abubaker Mohamad Awad. At some point during the party, Awad discovered that Lindh was allegedly a nationalist after he found a cap from the populist Sweden Democrats as well as a folder from the nationalist Alternative for Sweden. The findings led to Awad aggressively confronting other members of the after-party, demanding to know whether or not Lindh was "racist". During the night, after Lindh fell asleep, Awad raped a Swedish woman by forcing her to give him oral sex. The woman then woke Lindh up and contacted her friend Keith who came to the apartment, but later left after being threatened by Awad and slightly injured.

Abubaker Mohamed Awad, who had armed himself with a knife, refused to leave the apartment. Tomme Lindh tried to deescalate the situation while waiting for the police who had ignored the girls first emergency call. When shortly turning his back to the Sudanese, Tommie Lindh got stabbed several times and fell to the floor. Following the stabbing, Awad proceeded to assault and rape the same women again, this time in Tommie Lindh's blood while he was bleeding out on the floor. Police arrived at the scene several hours after the first call and Awad was arrested and taken away. Photos taken of Awad at the police station show him posing for the camera as if he were a rapper in a music video, and according to the police he was bragging about the murder. On October 19th Abubaker Mohamad Awad got sentenced to life in prison.

In November 2015, 17-year-old Mads Skjoldsøge was out with some friends in the town of Hillerød, Denmark, when they encountered a group of youths of various different non-Danish ethnic backgrounds. A minor argument broke out over a thrown lighter, but the two groups parted ways without further incident. Two days later, following an arranged meet-up between Skjoldsøge and one of the other youths – 16-year-old Abdi Ismail – the latter proceeded to stab Skjoldsøge (who later died in hospital), presumably over the previous argument two days beforehand. It was revealed during the trial of Ismail that he had actively sought out Skjoldsøge on Facebook, and arranged to meet up with him with the intent of stabbing him. Ismail received a maximum sentence of 8 years in prison.

Generation Identity Denmark have already put forward several proposals to the Danish Government, demanding that Denmark drastically changes its immigration policies, and changes its stance in order to effectively oppose any and all further immigration into Denmark, and to abandon the destructive policy and agenda that is multiculturalism.

Join Europa Terra Nostra – For the End of Multiculturalism in Europe