Has Populism Risen to Power in Romania?

As the echoes of the latest Romanian Parliamentary Elections, which took place on December 6th 2020, begin to subside, the newest revelation of the Romanian political scene is just preparing to take centre stage. 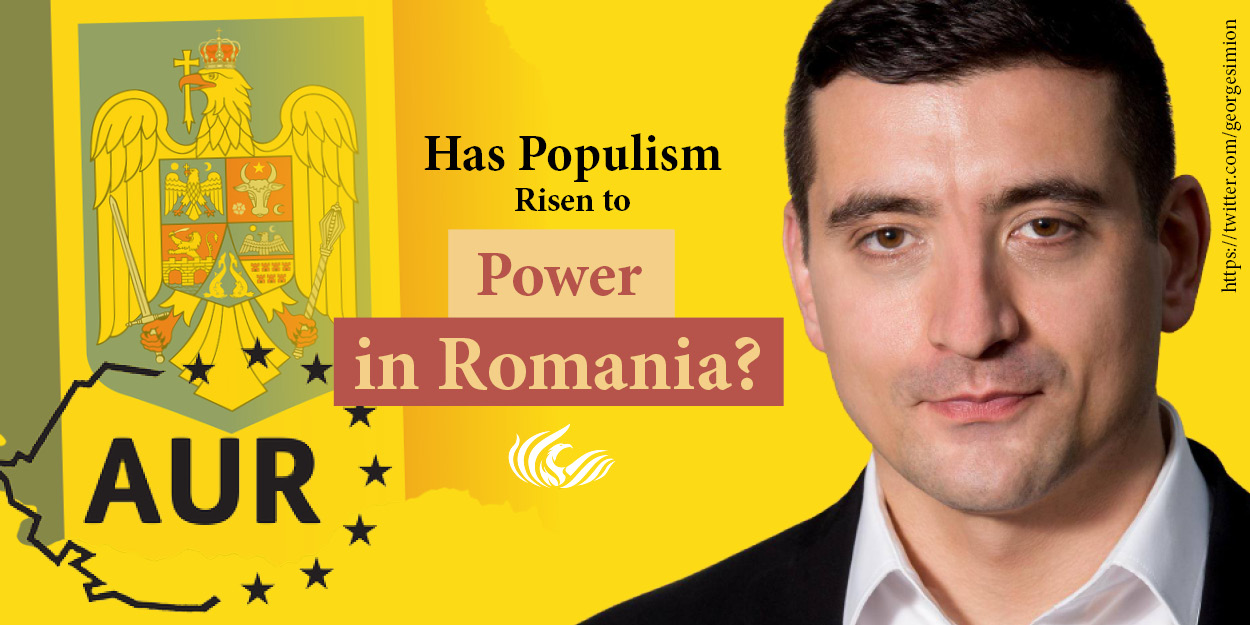 The recently-registered Alliance for the Unification of the Romanians (AUR) party managed to stun journalists, politicians, and Romanian society alike. Ignored by the mainstream media, the young party, headed by George Simion, managed to take full advantage of social media to convey their message to a mostly disgruntled population, which considers itself unrepresented by the current political parties in Romania.

One must also bear in mind that the attendance of this electoral cycle was the worst in recent Romanian history, with barely 30% of the population of voting age casting a ballot. This was a message aimed at the main political parties of Romania – the Liberals (PNL) and Social Democrats (PSD), which received almost an equal number of votes (approximately 30%). The „Reforming” Party (USR) managed to gather approximately 15% of the vote. Not even the strongest Romanian party managed to convince more than 9% of the total population of voting age to cast a vote in their support.

The underlying message and the reaction of each of the parties is noteworthy. It would make this op-ed article much too complex on the one hand, or it would not allow for an in-depth analysis of the situation in case. Therefore, I return to the new revelation of the Romanian political scene – the AUR, which managed to burst out, centre stage, with 9% of the vote, resulting in 14 senators and 33 members of the Chamber of Deputies. The fact that almost nobody predicted the AUR to do well at all makes the result even more surprising. 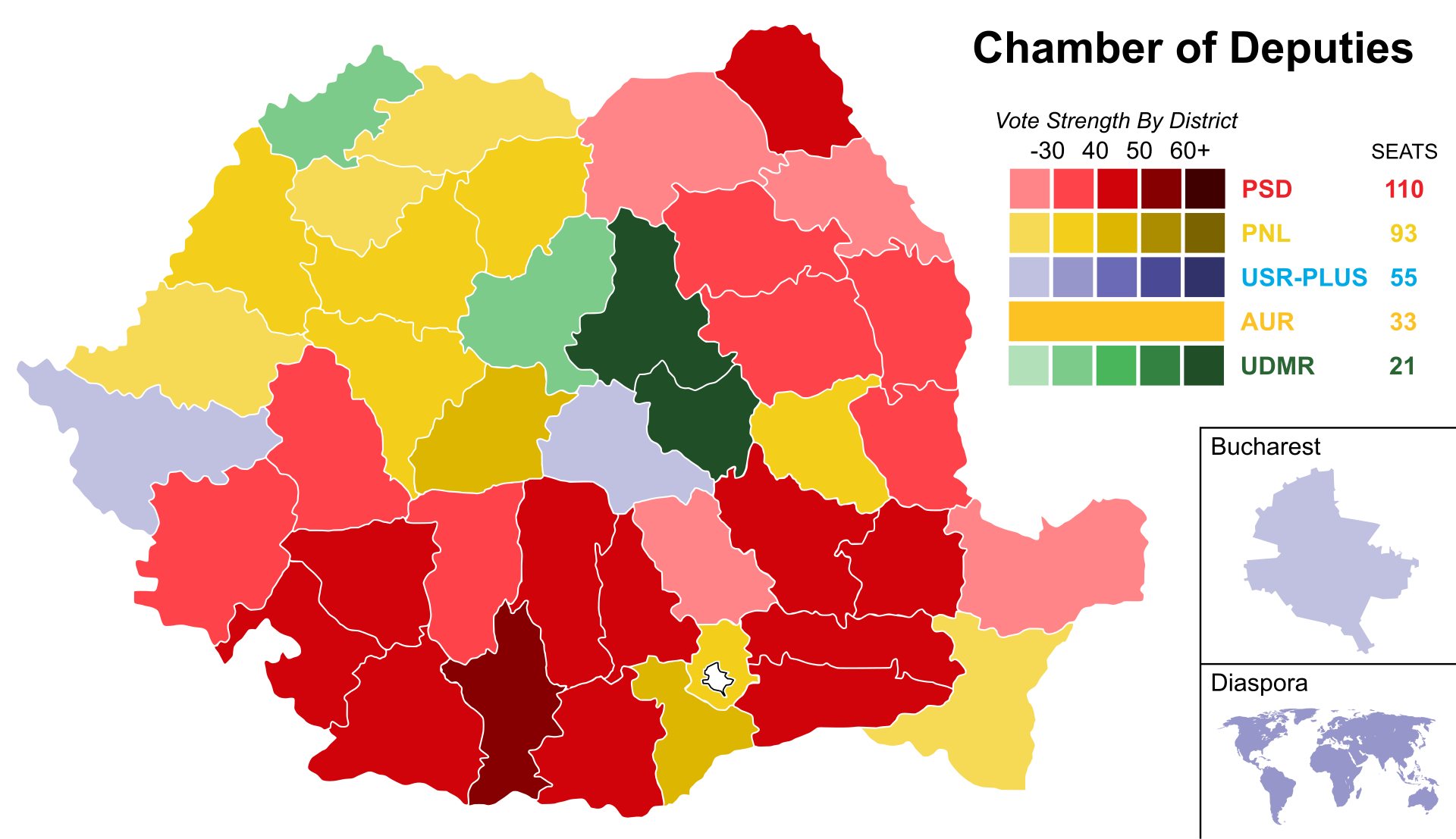 The message promoted by the new party is mostly Christian Conservative in nature, but the way in which the leadership and many of their members manifest themselves at the political rallies is quite flamboyant and, on more than one occasion, controversial.

The AUR contests most of the measures imposed by the liberal government towards the combatting of the COVID-19 pandemic, and fights for the removal of restrictions and planned vaccination campaigns. Their way of manifesting has led to several encounters with law enforcement and fines.

Another actively contested topic is the deforestation of Romania. This has become an increasing problem over recent years, in which mostly Austrian companies have promoted aggressive purchasing policies, which has led to the destruction of many ecosystems.

More recent plans of the AUR have included the reintroduction of mandatory military service, and the basic military training of young men.

Last, but not least, the AUR wishes for the reunification of Romania and Moldova – two separate sovereign states, but historical elements of the same nation. The topics of the historical roots, necessity, and current sociological realities are much too complex to outline here, but they represent a solid basis for the acceptance or the rejection of such plans.

Next to the flamboyant George Simion – who managed to get himself into conflict with the police on several occasions, during his actions as a civil rights activist – comes Claudiu Târziu, co-president of the AUR. He plays a significant role in linking the party to the structures of the Romanian Orthodox Church, and he was one of the most prominent organizers of the unsuccessful Referendum for the Tradition Family, which gathered over 3.5 million signatures in its support, but which ultimately failed, due to a very aggressive media campaign against it.

Another element behind the AUR’s success is represented by the political alliance made with the party Neamul Romanesc (Romanian Folk’s Party), also known as the Generals’ Party, due to the number of high-ranking retired military officers, which make up most of the party’s leadership. Retired General Mircea Chelaru, the head of the party and also the former Chief-of-Staff of the Romanian Army, seems to have provided the newly-formed and occasionally chaotic young political party with the necessary organizational skills.

One cannot overlook the fact that as soon as the results were made public, most of the mainstream media and “influencers” started lashing out at party members, party officials, and their voters with open and militant hate-speech. Sources were not checked and statements not confirmed, but everything was done to portray the aforementioned people as uneducated, violent, militaristic, pro-Russian or just plain stupid.

Since the AUR’s pool of voters is made up mainly of young people under 34 years of age, the challenges lying ahead of the party include the counter-balancing of the negative campaign coordinated against them, keeping the loyalty of their young voters and to expand into other demographics. Most importantly of all, another key challenge is to outline their strategy for the next four years, in order to prevent their victory from becoming a one-time occurrence.

There are varied threats to their development, as the new MPs will almost certainly be “hunted” for recruitment by the other political parties. Changes in political affiliation is neither uncommon nor difficult for any of the Romanian MPs. There is also the usual risk of organised smear campaigns against the AUR, with the perpetrators wishing to tarnish the public image of the party in the long-term.

In terms of their external political outlook, a specific ideological label is hard to find. Due to their pro-European stance, they cannot be called Eurosceptics, yet cannot be included in the pro-EU category either. Their tendency towards the Visegrad Group will make itself felt over the next few years. Lacking the traditional ingredients for populism, but also not essentially nationalistic, the new party will most likely have to find itself ideologically after their surprise results.

Regarding Romania’s neighbours, some other questions are also of interest – what is the party's position on NATO? What is its relationship with Russia? What is the AUR's position towards neighbouring countries where there are Romanian minority populations (Hungary being a key example)?

Party leader George Simion declared in an interview with Radio Free Europe and Radio Liberty on the 8th December, "Do you know what I did not consider right with the EU and NATO? That we are on our knees instead of standing, as Poland does, and negotiating in our own best interest."

The relationship with Russia must also be considered difficult. The idea of a reunification of Romania with the Republic of Moldova – and thus an eastward expansion of NATO – affects Russian national security interests. In the aforementioned interview, Simion labelled Russian President Vladimir Putin as a "murderer". The 20 years of his rule "means that he is a dictator, a plague, and a threat to Romania and democracy." In this context, the AUR leader also referred to the negative coverage of his person by the Russian state news agency Sputnik. Simion continued – “Russia over the centuries – from the Tsarist Empire to the Soviet Union and Putin's Russia – have done a lot of harm to Romania." At the same time, he expressed concern about what Romania sees as Russia's excessive influence in neighbouring Hungary – “Hungary is a big friend of Vladimir Putin.”

This partly answers the last question – the relationship with Hungary. It must also be described as difficult. The Daily News Hungary even linked the AUR to the Romanian Secret Service – “Is the Romanian Secret Service behind the anti-Hungarian AUR?" However, the article only contains speculations by the Hungarian political scientist János T. Barabás, from the Institute of Foreign Affairs & Foreign Economics (KKI) in Budapest, and can be classified as propaganda. Nevertheless, questions remain open with regards to the relationship with Romania’s neighbours, which the AUR will have to answer in the near future.