Even the continent-wide government restrictions imposed across Europe, as a result of the COVID-19 pandemic, cannot stop Europa Terra Nostra its networking activities. On Wednesday evening, 2nd September, Europa Terra Nostra held its first online video meeting, to provide members with the opportunity to get meet and get acquainted with one another, as well as to discuss various topics of interest with the chairman of ETN, Dan Eriksson. Numerous participants and members from a variety of different European nations joined the meeting and engaged with one another in a comfortable and productive environment.

Chairman Dan Eriksson began the meeting first by welcoming all participants present, before introducing himself, as well as his deputy, Ivan Bilokapic – host of ETN’s podcast show, Undertow, who, unfortunately, had not been able to make the meeting, due to external commitments – and the Secretary-General of ETN, Jens Pühse. German author Sascha Roßmüller, whose books have also been published by Europa Terra Nostra, was also in attendance at the meeting. 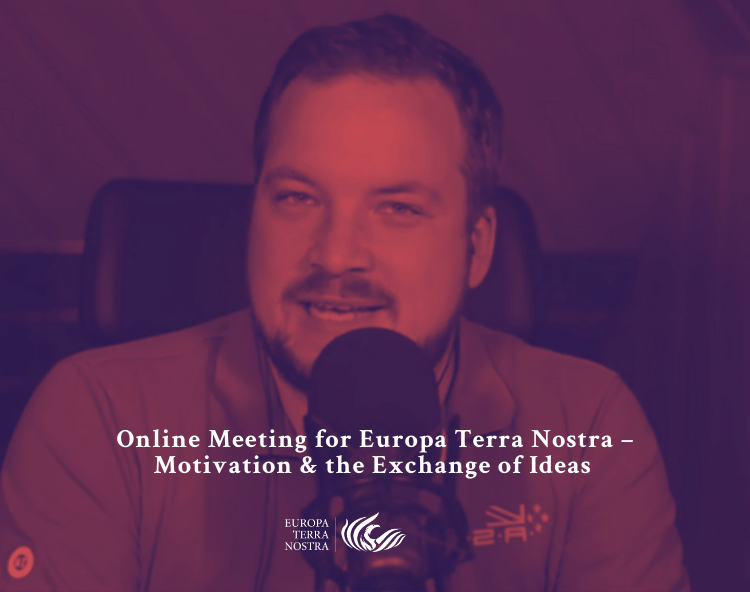 In his introduction message, Dan Eriksson briefly outlined Europa Terra Nostra and its various goals – networking, the long-term overcoming of historical burdens between European nations, and an invitation to everybody who is interested in aiding ETN to come forward and engage with the organisation practically. Examples of such practical engagements and contributions include writing, editing, organisation, technical tasks, linguistics or any other useful skills that one is willing to bring forward to ETN. This part of the meeting was followed by a general discussion surrounding other practical issues, in relation to how members can effectively contribute to the growth of ETN. A Q&A session was also held, in which all those in attendance were given the opportunity to ask any questions they had to the ETN board. This Q&A session was extremely lively, saw contribution from virtually every member in attendance, and many interesting ideas and comments from several members were brought forward to the board’s attention.

Despite the ongoing COVID-19 restrictions imposed across Europe, ETN Chairman Dan Eriksson announced that several events and activities in a number of countries will continue to be planned further. ETN members were also encouraged to promote Europa Terra Nostra in their own respective countries, and to kick-start their own respective nationalist activities, which, of course, ETN will be willing to aid with, if aid is required. Future meetings between the leadership board of the ETN and the organisation’s members are already currently being planned, where other future plans and activities are set to be discussed in further detail.

Overall feedback regarding ETN’s first online meeting has been very positive, and ETN hopes that future meetings – whether they be online or in person – will be just as interesting and productive, if not more so.