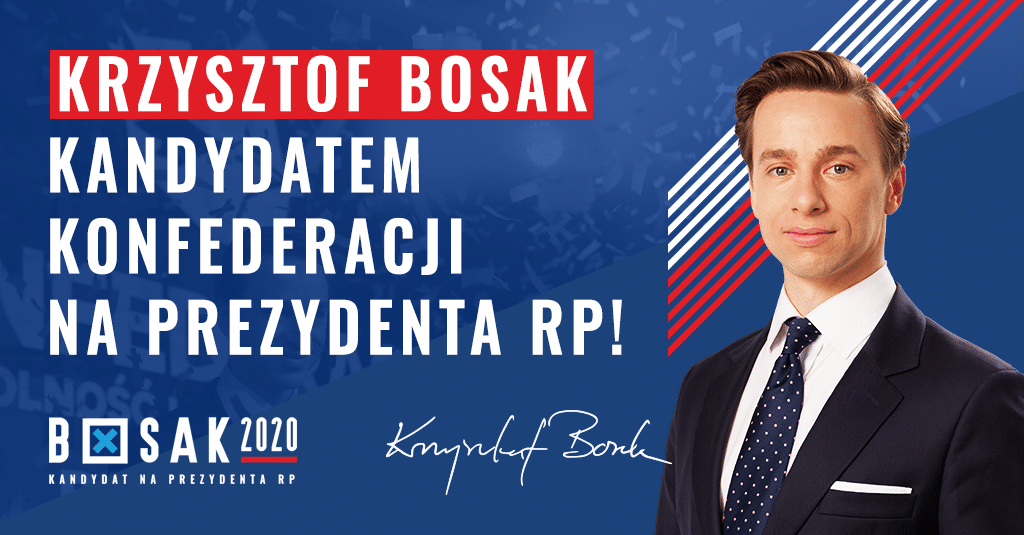 Konfederacja is a patriotic electoral list-coalition of catholic, monarchist and nationalist leanings. It started as a cooperation in 2018 between the two political parties KORWiN and Ruch Narodowy which was later joined by the monarchist Grzegorz Braun. In the elections to the national parliament Sejm on 13th of October in 2019 Konfederacja obtained 6.81% of the votes and introduced eleven Members to the Sejm.

Konfederacja-candidate Krzysztof Bosak of the nationalist Ruch Narodowy-faction is one of those members of parliament and already held a seat there from 2005 to 2007 for the League of Polish Families. Regarding this presidential election the eurosceptic Bosak amongst others campaigned for a zero-deficit budget policy, lower VAT rates on food, a reduction of Lower House Sejm members by half, transferring some central institutions outside Warsaw and for a pragmatic policy with Russia. Moreover, Bosak campaigned for traditional values and against LGTBQ gender ideology. Bosak also criticised the government for giving taxpayers’ money to “leftist global organisations” such as the World Health Organisation (WHO) which deals with the promotion of killing unborn children or so-called early sex education.

With an eye towards the second ballot on 12th of July, the incumbent Andrzej Duda solicited for Bosak´s voters at an event in Lowicz by announcing his goal was comparable to Bosak´s, namely a strong and secure Poland. However, Konfederacja immediately after the election declared that it wouldn´t support one of them for the second ballot. Recently in November, Bosak denounced the government’s immigration policy as fraudulent, pointing out that PiS rejected the EU’s refugee quota in 2015 but then “brought in ten times more immigrants” itself.

The nationalist candidate Krzysztof Bosak declared after the election: „Although the others still have drawn more voters in these elections, we are gaining greater interest from society. Moreover, we have the highest dynamic of growth, and that´s why we are the future.“