Trust-building requires, first of all, personal contact, and that is why Europa Terra Nostra – despite the restrictions as a result of the ongoing COVID-19 pandemic – strives to strengthen close connections between nationalists hailing from different countries across Europe. To this end, on the evening of September 29th, board members and authors representing Europa Terra Nostra held their second online meeting via Zoom. As with the previous online meeting, the new members of ETN were allowed to introduce themselves to everybody, put forward their own proposals for organisational activities, as well as being given the opportunity to ask Chairman Dan Eriksson and/or Secretary-General Jens Pühse any questions that they may have had. 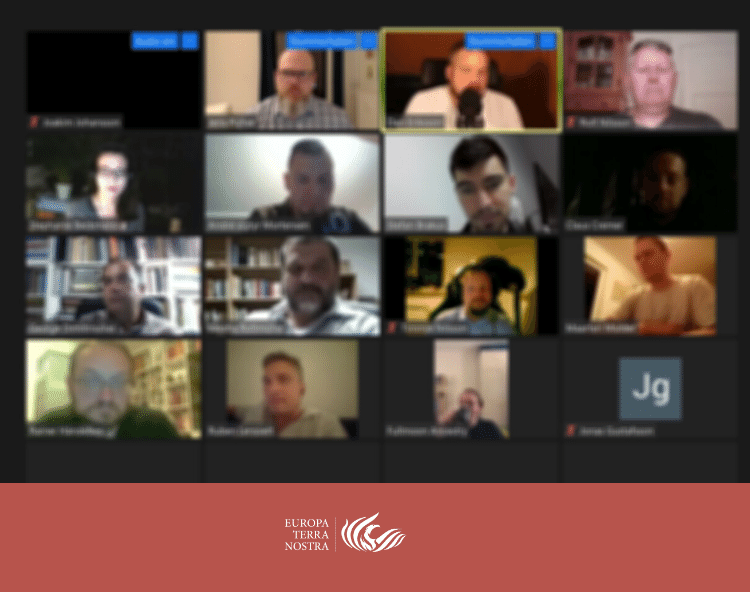 Due to the high number of new members in attendance at this second online session, Chairman Dan Eriksson reiterated some statements and information that he made in the first online session, to bring the new members up to date with ETN activities. Following this, Dan provided a summary of the recent ETN trip to Copenhagen, Denmark, and its subsequent conference. The Danish members in attendance at the meeting were then invited to express their own thoughts, feelings and opinions on how the conference went. Although the ongoing COVID-19 pandemic is making any physical meeting event difficult at the moment, there are still two planned events by Europa Terra Nostra, which will be announced via newsletter very soon.

Given the likelihood that the Polish Independence Day March on the 11th November will be cancelled, due to the ongoing pandemic, ETN will continue to plan ahead regarding the sending of a delegation to Poland around that time, as well as to make any preparations for alternative plans, in case a cancellation of the march does indeed happen. There was also a lengthy discussion surrounding ETN’s policy of healing old conflicts and tensions between European nations which continue to view one another as historic rivals. One member in attendance, hailing from Romania, expanded upon this topic by citing the historic rivalry between his own homeland and Hungary as an example of such matters being obstacles on the path to European solidarity and mutual co-operation.

Another topic which was the focus of intense discussion between members at the online meeting was the new Pact on Migration, as proposed by the European Union. There was a common consensus among those in attendance that this new Pact on Migration is something that is to be prioritised by ETN, as something that must be countered by every nation in Europe. Given how this new pact is being presented to the European public through lies and deceit, in order to mask its true nature, this is a particular topic which will be focused on especially closely, as policies such as these are the very reason as to why organisations such as Europa Terra Nostra exist in the first place. ETN has already reported on this matter three times in the past. Nevertheless, this topic of countering the new Pact on Migration is definitely worthy a more extensive campaign. How this new campaign will manifest was discussed extensively by the board and the members in attendance, and many suggestions put forward are set to be further explored by the ETN board as soon as possible. Finally, Chairman Dan Eriksson stated that a third online meeting between the board and members of ETN will be planned in the coming weeks.

From Conversation to Revolution – Join Europa Terra Nostra, Where Nationalist Ideas Are Forged