The Southern Poverty Law Center (SPLC) is one of the most influential organisations in the USA when it comes to fighting alleged oppression, discrimination and violence against people of colour. However, the fact that self-proclaimed social justice warriors are in fact pushing an anti-White agenda is all too often forgotten or deliberately swept under the carpet. "Extremist White groups" promoting themselves as patriotic and nationalist associations are often sweepingly denigrated by the American left. Recently, however, the SPLC made the headlines again precisely because of these issues. It is well worth taking a closer look at this organisation. 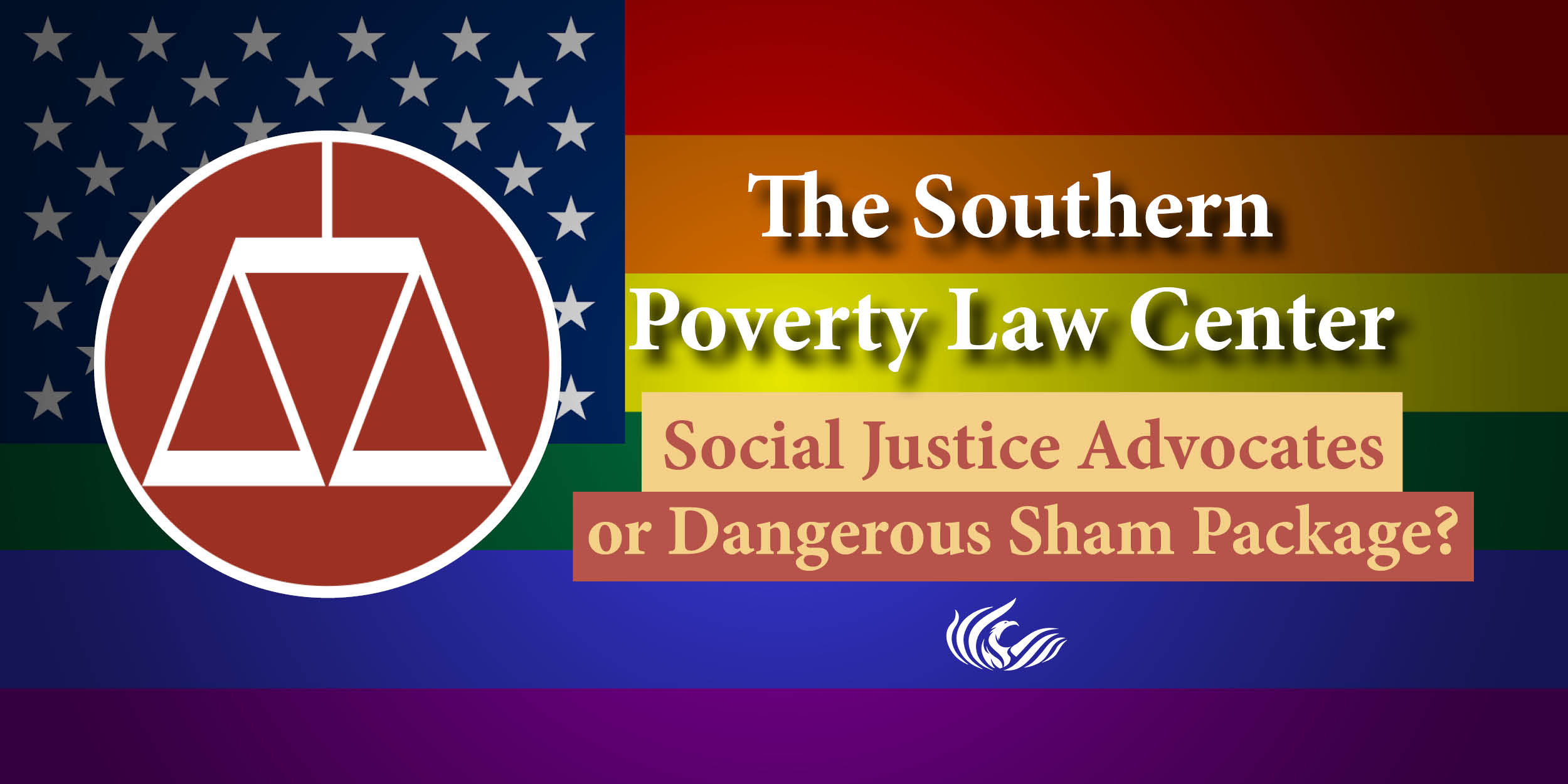 According to its website, the Southern Poverty Law Center is an American non-profit organisation (NPO) whose mission is "to dismantle White supremacy, strengthen intersectional movements and advance the human rights of all people". The SPLC was founded in August 1971 by civil rights lawyers Morris Seligman Dees, Jr., Joseph Levin, Jr. and Horace Julian Bond in Montgomery, Alabama as a law firm that originally focused on legal challenges to issues such as the fight against poverty, racial discrimination and the death penalty in the United States. In 1980, the SPLC changed its litigation strategy and began actively filing civil suits for damages on behalf of victims of alleged acts of violence by the Ku Klux Klan. In parallel, it initiated numerous other lawsuits, challenging what it called "institutional racial segregation and discrimination, inhumane and unconstitutional conditions in prisons and detention centres, discrimination based on sexual orientation, mistreatment of illegal immigrants and the unconstitutional mixing of church and state". The successes in court and numerous donations brought the SPLC considerable funds, from which it was also able to finance the erection of the Civil Rights Memorial by the artist Maya Lin in the centre of Montgomery, Alabama in 1989.

The monument is a fountain in the shape of an asymmetrical, inverted cone, and is made of granite. On it are engraved the names of 41 so-called "civil rights martyrs" who died between 1954 and 1968. The year 1954 marks the decision of the US Supreme Court that racial segregation in schools was to be made illegal, and 1968 the year of the assassination of the Black civil rights activist and Nobel Peace Prize winner Martin Luther King, Jr. A quote from King’s I Have a Dream speech is also featured on the memorial, and King’s name is also among the 41. A display at the Civil Rights Memorial also lists 74 people as "The Forgotten", who are “believed to have been killed as a result of racially motivated violence” between 1952 and 1968. These names were not directly included in the memorial because there was insufficient information about their deaths at the time of its construction.

In 1981, the Southern Poverty Law Center launched a project called Klanwatch. As part of this project, the organisation gave itself its mission to monitor and document the activities of the Ku Klux Klan. Klanwatch was later renamed Hatewatch, and today monitors several hundred "extremist groups" in the United States. Also as part of the project, however, the organisation states that it also "publishes investigative reports, trains law enforcement officials and shares key intelligence", as well as "provides expert analysis to the media and the public". For example, the independent messaging app Telegram also became a target of the self-proclaimed Hatewatchers. In a dishonestly tendentious analysis from June 2019, Hatewatch tried to place Telegram users within the same category as various terrorists – including the Islamist terror organisation the Islamic State (IS) – and to defame the platform’s users across the board as potential criminals. This shot backfired, however, because the analysis was rather revealing in that it exposed how much of a thorn in the SPLC's side are such platforms that evade big tech censorship, and still take the right to freedom of expression seriously. In January 2021, Telegram was the most downloaded non-gaming app for the first time.

The Southern Poverty Law Center recently caused another stir when it officially announced that it had removed the Black Separatist listing on its Hate Map to underscore that White supremacist extremism is "the most dangerous threat to national security", while Black separatism is "rooted in valid concerns about how federal and state institutions treat Black people". "Black separatism was born out of valid anger against very real historical and systemic oppression", the organisation tweeted in this context on the 8th February 2021, thus not only attracting the displeasure of many White Americans, but also drawing the attention of the public – especially internationally – to its Hate Map, which, until then, had remained rather unnoticed there. On this interactive map, the Southern Poverty Law Center marks 838 so-called hate groups across America. These groups are divided into 20 "ideologies", ranging from Christian Identity to Anti-Immigrant, White Nationalist and General Hate. The Hate Map can be filtered by 14 of these "ideologies" or by state. With a few mouse clicks, the compiled data can also be downloaded. 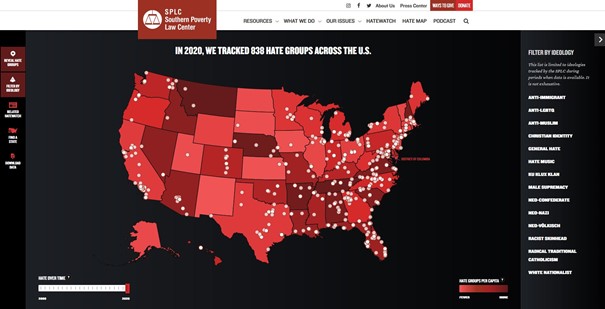 It is both significant and revealing in connection with this so-called Hate Map that there are no references to left-wing extremist groups such as Antifa, nor does one find any radical Islamist associations or their hate preachers, aside from the Nation of Islam, which should be viewed particularly critically from all sides in the USA since the events of 9/11. Instead, various supposedly anti-Muslim groups are listed. It is not without reason that the lists of the SPLC have repeatedly been the subject of criticism – and sometimes even legal disputes – in the past.

However, the facade of these social justice advocates begins to crumble when one takes a closer look behind them. For example, in March 2019, the Southern Poverty Law Center fired co-founder Morris Seligman Dees, Jr. for "unknown reasons", and then subsequently removed his biography from their website. In a statement about the dismissal, the SPLC announced that it would bring in an "outside organisation to conduct a comprehensive assessment of our internal climate and workplace practices". In fact, following Dees` dismissal, some SPLC employees complained in a letter to management that "allegations of mistreatment, sexual harassment, gender discrimination and racism threaten the moral authority of this organization and our integrity along with it".

According to their own annual report, the organisation's assets amounted to approximately $471 million in 2018. Nonetheless, it also seems highly questionable, to say the least, that the directors of the Southern Poverty Law Center, with annual salaries ranging from $171,000 to $297,000, are among the 50 highest-paid directors of non-profit organisations in the US. The accusation of personal enrichment, which has been made repeatedly by employees of the organisation, is understandable in view of these sums.

That the Southern Poverty Law Center is supposed to be a non-profit organisation that demands and promotes social justice and social peace is nothing else but a farce. Rather the organisation pushes and widens social division in the USA by all means and poisons the political climate permanently; it promotes mistrust and hatred between White and non-White Americans; its projects, programmes and campaigns are exclusively ideologically-driven and follow the left, liberal, anti-White, globalist agenda. On the one hand, they denounce and accuse Whites as supremacists, but on the other hand, they disenfranchise people of colour by stigmatising them as oppressed victims. As with many other supposedly "non-profit" organisations, one may also ask oneself here whether – apart from the destructive political agenda – other base motives may or may not be influencing the SPLC's "business model", freely following the motto “split and get rich doing it.”